What is RAID and What Are the Different RAID Modes? 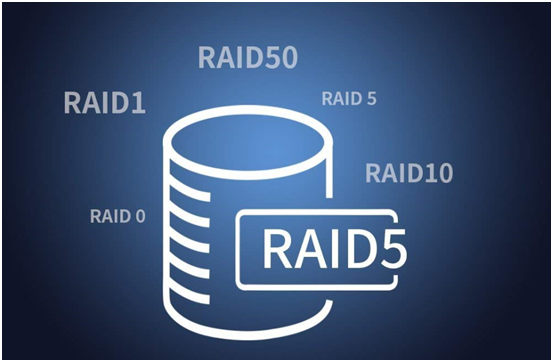 RAID is an acronym for Redundant Array of Independent Disks.

RAID is a data storage virtualization technology that combines multiple physical disk drive components into one or more logical units for the purposes of data redundancy, performance improvement, or both.

Data is distributed across the drives in one of several ways, referred to as RAID levels, depending on the required level of redundancy and performance. The different schemes, or data distribution layouts,

are named by the word “RAID” followed by a number, for example RAID 0 or RAID 1. Each scheme, or RAID level, provides a different balance among the key goals: reliability, availability, performance, and capacity.

RAID 0 consists of striping, but no mirroring or parity.

The capacity of a RAID 0 volume is the same; it is the sum of the capacities of the drives in the set. But because striping distributes the contents of each file among all drives in the set, the failure of any drive causes

the entire RAID 0 volume and all files to be lost. The benefit of RAID 0 is that the throughput of read and write operations to any file is multiplied by the number of drives because, reads and writes are

done concurrently. The cost is increased vulnerability to drive failures—since any drive in a RAID 0 setup failing causes the entire volume to be lost, the average failure rate of the volume rises with

the number of attached drives. RAID 0 does not provide data redundancy but does provide the best performance of any RAID levels. 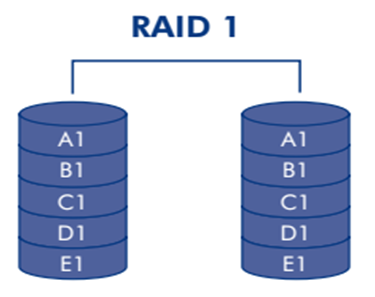 RAID 1 - Data protection is the safest

RAID1 is data protection mode (Mirrored Mode). Half of the capacity is used to store your data and half is used for a duplicate copy. RAID 1 consists of data mirroring, without parity or striping.

Data is written identically to two or more drives,If one drive goes down your data is protected because it’s duplicated. The array continues to operate as long as at least one drive is functioning. 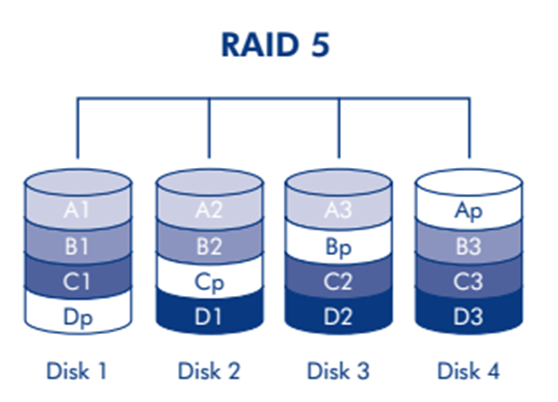 RAID 5 requires at least three disks. In systems with four drives we recommend that you set the system to RAID 5. This gives you the best of both worlds: fast performance by striping data across all drives;

data protection by dedicating a quarter of each drive in a four drive system to fault tolerance leaving three quarters of the system capacity available for data storage.

Upon failure of a single drive, subsequent reads can be calculated from the distributed parity such that no data is lost.

The risk is that rebuilding an array requires reading all data from all disks, opening a chance for a second drive failure and the loss of the entire array. 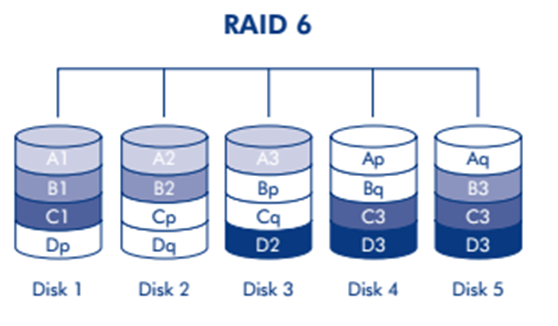 RAID 6 requires a minimum of four disks. As with RAID 5, a single drive failure results in reduced performance of the entire array until the failed drive has been replaced.

With a RAID 6 array, using drives from multiple sources and manufacturers, it is possible to mitigate most of the problems associated with RAID 5.

The larger the drive capacities and the larger the array size, the more important it becomes to choose RAID 6 instead of RAID 5. 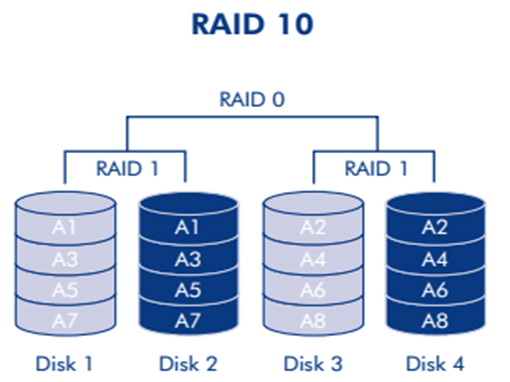 Arrays of more than four disks are also possible. A system set to RAID 10 yields half the total capacity of all the drives in the array.

RAID 10 provides better throughput and latency than all other RAID levels except RAID 0. This RAID mode is good for business critical database management solutions that require

maximum performance and high fault tolerance. Thus, it is the preferable RAID level for I/O-intensive applications such as database, email, and web servers,

as well as for any other use requiring high disk performance.

six drives. One drive from each of the RAID 5 sets could fail without loss of data; for example, a RAID 50 configuration including three RAID 5 sets can tolerate three maximum potential simultaneous drive failures

(but only one per RAID 5 set). RAID 50 improves upon the performance of RAID 5 particularly during writes, and provides better fault tolerance than a single RAID level does.

This level is recommended for applications that require high fault tolerance, capacity and random access performance.

resulting in a RAID 0 array striped across RAID 6 elements. It requires at least eight disks.

but is generally implemented using software RAID 0 over hardware RAID 10. Being “striped two ways”, RAID 100 is described as a “plaid RAID”.

JBOD (Just a Bunch Of Disks)

JBOD (abbreviated from “Just a Bunch Of Disks”,also is known as “None RAID”) is an architecture using multiple hard drives exposed as individual devices.

Hard drives may be treated independently or may be combined into one or more logical volumes using a volume manager like LVM or mdadm, or a device-spanning filesystem like btrfs;

such volumes are usually called SPAN or BIG. A spanned volume provides no redundancy, so failure of a single hard drive amounts to failure of the whole logical volume. 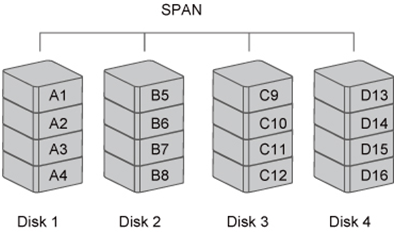 Concatenation or spanning of drives is not one of the numbered RAID levels, but it is a popular method for combining multiple physical disk drives into a single logical disk. It provides no data redundancy.

Spanning provides another maximum capacity solution, which some call it as “Big/Large”. Spanning combines multiple hard drives into a single logical unit. Unlike Striping, Spanning writes data to the first physical

What makes a SPAN or BIG different from RAID configurations is the possibility for the selection of drives. While RAID usually requires all drives to be of similar capacity and it is preferred that the same or similar

drive models are used for performance reasons, a spanned volume does not have such requirements. The advantage of using this mode is that you can add more drives without having to reformat the system. 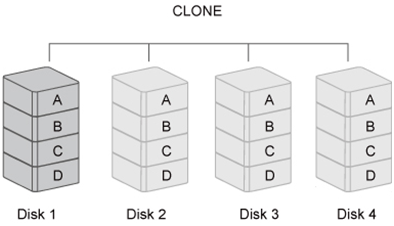 CLONE consists of at least two drives storing duplicate copies of the same data. In this mode, the data is simultaneously written to two or more disks.

Thus, the storage capacity of the disk array is limited to the size of the smallest disk.